Angela Merici was born about 1474 in Desenzano, a village situated on the shores of the beautiful Lake Garda in Northern Italy.

Her father, Giovanni, had his family roots in Brescia – a city close to Desenzano while her mother, Caterina de Bianchi, came from Salo, another town opposite Desenzano on the shores of Lake Garda.

While the family were still young they moved to some farming land outside the town called Le Grezze. Here the three boys and two girls grew up in the freedom of the fields with a good balance of work and play.

Giovanni would gather the family around the fire each evening for sharing and storytelling. Sometimes he would read from the Bible and sometimes he would let the students take turns choosing a story of one of their favourite saints – heroes and martyrs who had generously served God. Giovanni also taught his students to read. He wanted them to learn as much as they could since there was no chance for them to go to school. 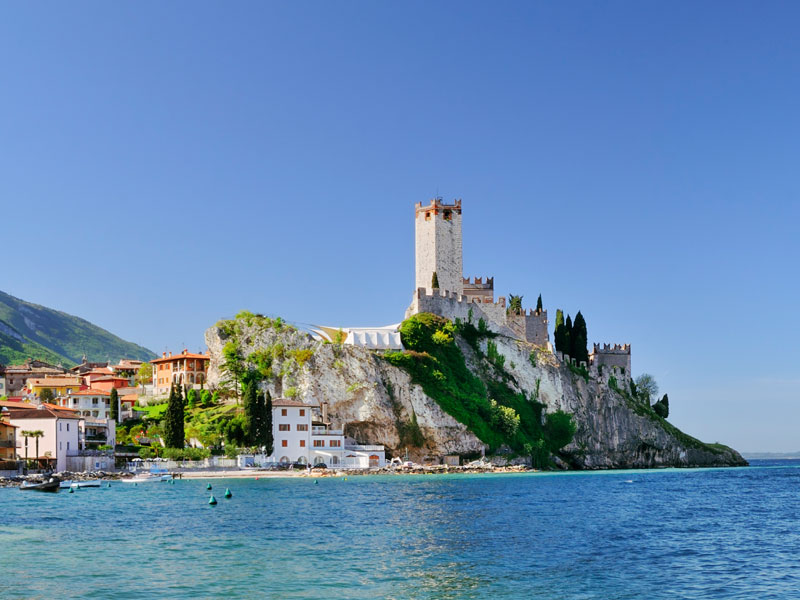 A view of Lake Garda seen from the town of Desenzano 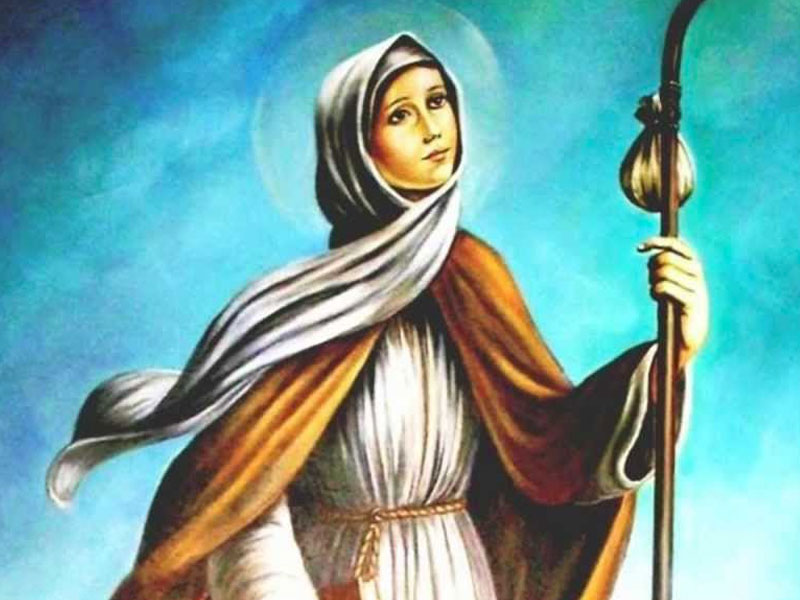 St Angela as a pilgrim

The security of Angela’s family life ended abruptly when, within a short space of time, both her parents, Giovanni and Caterina, died. Then not long after their deaths her sister, Gianna Maria, became very ill and died within a few days. This brought a great sadness to Angela and her brothers but they continued, with the added help of some farm workers, to grow their crops and tend the vines and the olive trees.

Each day after doing the daily jobs in the farmhouse Angela would pack lunches for her brothers and the workers who helped on the farm. She would carry the lunches out to the field and many times she would eat her own under a shady tree.

One day in an area of the fields called Brudazzo, Angela took lunch to the workers who were singing as they climbed the ladders to pick the ripened olives. In the heat of the day after they had lunch Angela laid down to have a short sleep known as a siesta. During this time, she experienced a vision. Angela saw what appeared to be angels going up and down a ladder that looked as if it reached as high as heaven. Among these angels, Angela saw her sister who radiated joy assuring Angela that she was in Heaven. She told her sister, Angela, that one day she would gather a group of women like herself. These women would become companions to one another forming a company to do special work for the Church. As the vision disappeared Angela knelt down and thanked Jesus for her sister’s happiness. She wondered what the message could mean. She wouldn’t understand until many years later.

When Angela was 16 years old she moved with her brother from Le Grezze to the nearby lakeside town of Salo where their Uncle and Aunt Biancosi welcomed them. This new home meant a different kind of life for Angela. The town of Salo was bigger than Desenzano. The people there had many parties and celebrations for every season and feast. While Angela was friendly and kind to all she met she found that she really wanted more time to be alone, to become more aware of God’s presence and action in her life. She wished for a quieter spot where she could speak to God in her heart.

When she was 18 years old, following the inspiration of the Holy Spirit, Angela became a Franciscan Tertiary. This enabled her to receive Communion more often. She wore the simple robe of the Franciscans and a white veil and was called Sister Angela. Shortly after this, Angela moved back to Le Grezze which was now her brother’s home. She attended Mass early each morning then joined the workers in the fields. She also visited the sick and took care of poor neighbours. The people respected her as Sister Angela and were happy she had come home. They realised that they had a special person living among them.

In 1516, Angela went to Brescia to stay with Caterina Patengola, who was grieving over the loss of her husband and sons. In this way, Angela began a mission of comfort and counsel especially in the war ravaged Brescia. This mission gradually expanded to embrace all those who came to seek her prayers, her mediation and her efforts at reconciling others who were in conflict. She became known as a great peacemaker.

On leaving the Patengola home, Angela went to live with Antonio Romano, a young merchant who had no family. From here Angela went on various pilgrimages to pray at the tombs of the martyrs and saints. She went to Mantua, Varallo and finally in 1524, Angela embarked on a journey to the Holy Land. This six month pilgrimage was fraught with all kinds of risks and dangers including pirates, storms and sailing off course.

Following this, Angela took a pilgrimage to Rome for the Jubilee year of 1525. During the two weeks she spent in Rome she had a personal visit with the Pope. He asked her to stay in Rome to be a director of an orphanage. Angela refused this offer because she had a strong sense that she was to return to Brescia to form her Company of women.

In 1529, under the threat of military raids, Angela agreed to take refuge at Cremona with the family of Agostina Gallo, a Brescian agriculturist and many others. There she came in contact with the court of Francesco Sforza 11, who was the exiled Duke of Milan. He expressed his desire to meet Angela during her stay in Brescia, asking her prayers for himself and the people of Milan.

Returning to Brescia she devoted herself to the work God had given her. She left the Gallo family and moved to a small room near the public fountain next to the Church of St Afra. This enabled her to be more available to people, to care for those who needed her and to offer them wise advice. It also gave her more time for prayer and time to begin forming the company of women foreshadowed in her vision at Brudazzo many years ago.

Guided by the Holy Spirit and confident of women’s capabilities, Angela established a state of life where women could live dedicated to God, open to spiritual motherhood while remaining in the world, with their families or in their own sphere of work. This freedom of choice was a great step forward in the empowerment of women.

Even though they were not bound by a common activity, they were not isolated, but members of a spiritual family supported by a rule and under the patronage of the virgin martyr, St Ursula. The foundation of the Ursulines, took place on November 25, 1535. This was just one year after St Ignatius Loyola had established the Society of Jesus.

Angela did not live long after the foundation of the Company. Her great gift to us comes in her writings. These are called counsels and legacies and contain so much of Angela’s wisdom and insights. Down through the centuries Ursuline Education has been shaped by the vision of Angela Merici. As educators we continue to be inspired, motivated and directed by her wisdom, her understanding of the human person and her relationship with God.

The following words are directly from Angela’s Counsels and Legacies.  They reveal a way of being in relationship with God and each other. Living in the way Angela invites us, not only allows us to live the Gospel authentically but also forms within us the heart of a true educator.

Have Respect for each person

“Consider the respect you owe them, for the more you respect them the more you will love them, and the more you love them the greater care you will have of them. Then it will be impossible for you not to have them all graven in your hearts night and day each one individually, for true love acts in this way.”

Relate to all with Kindness and Gentleness

“Be kind and gentle with your students…..you will achieve more with gentleness and kindness than by harsh and cutting rebukes.”

“Do not lose courage if you feel yourselves incapable of knowing and doing all that such a special charge demands. Have confidence and strong faith that God will assist you in everything.”

“Welcome them all, bear with all of them impartially because they are all God’s students and you have no idea what God wishes to make of them.”

Live in Harmony and Peace

“The last word that I address to you and one I urge upon you with all the ardour of my soul is that you live in harmony, united together in one heart and one will. Be bound to one another by the bond of love, treating each other with respect, helping each other, bearing with one another in Christ Jesus.”

Send us an email